I thought I would post here every day, but just taking care of Abby is a lot of work!!

She is recovering from her surgery like a trooper. When you look at her standing from the other side (where she doesn’t have a giant scar and half-shaved backside), she really looks the same. She is a little hopper now, but quite stable.

That being said, she reminds us daily that she is a 15 month old puppy. Despite several shopping trips and countless attempts, we can’t find an alternative to the cone that she will keep on. She is obsessed with her incision and even tries to lick it through the cone. 8 more days…

I also can’t seem to get her to sleep past 3 or 4am. I think she might need her pain meds, but if I kennel her again after giving them, she just whines–for hours.  So, here we are in her favorite place–on the couch– spending some quality time together. We have reached a compromise that she won’t jump on or off the couch as long as we will put her up there and stay with her.

Abby is walking on her own and doing great! Almost too great. She’s eating very well which was one of my biggest concerns. I’m so thankful we haven’t had any complications, but we are struggling with the cone and confinement. Any suggestions appreciated!

Cone: she ate the soft fabric one and the inflatable Kong didn’t prevent access to the incision so we’re back to the evil plastic one. 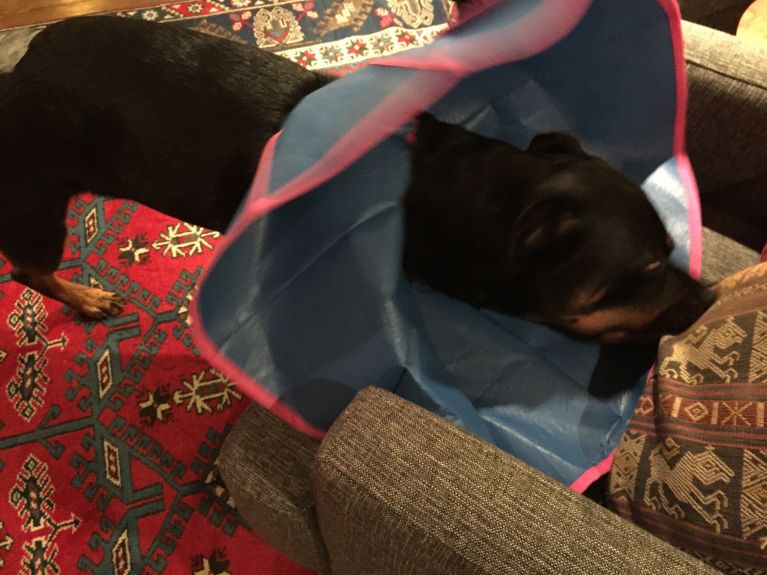 It seems cruel to limit her peripheral vision and ability to get through small spaces while she’s still getting her balance.

Confinement – she has a crate but it’s hard to get in and out of with the cone on and she usually goes boneless right in front of the door. We also have a laundry room off the family room with a bed for her and a baby gate. But she howls when she’s in there – especially if she can see me on the other side of the gate.

She’s was on rest for two months prior to surgery, but we did allow her up on the couch with us so it wasn’t quite this strict. Eleven more days… 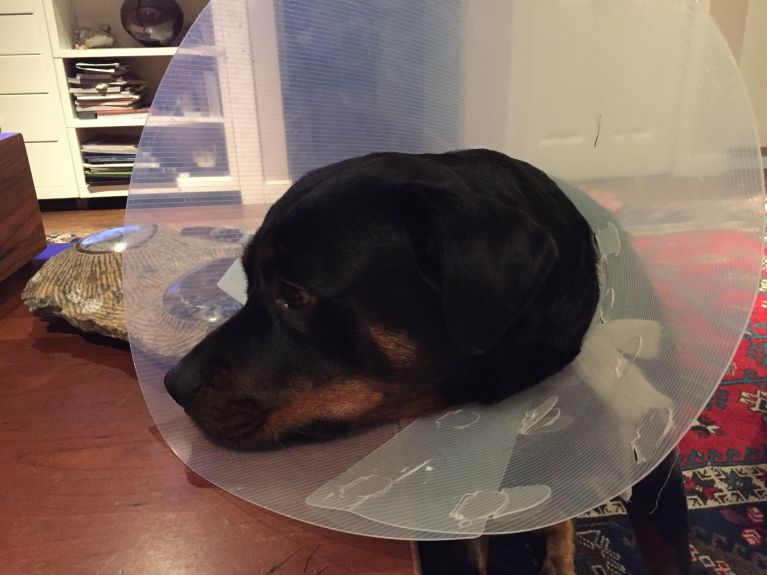 Long long day so just a quick post. Surgery was successful. She was a little picky and obstinate at the clinic, but she’s happy to be home. She finally ate which is a relief. And walked – a little tippy but that’s ok! 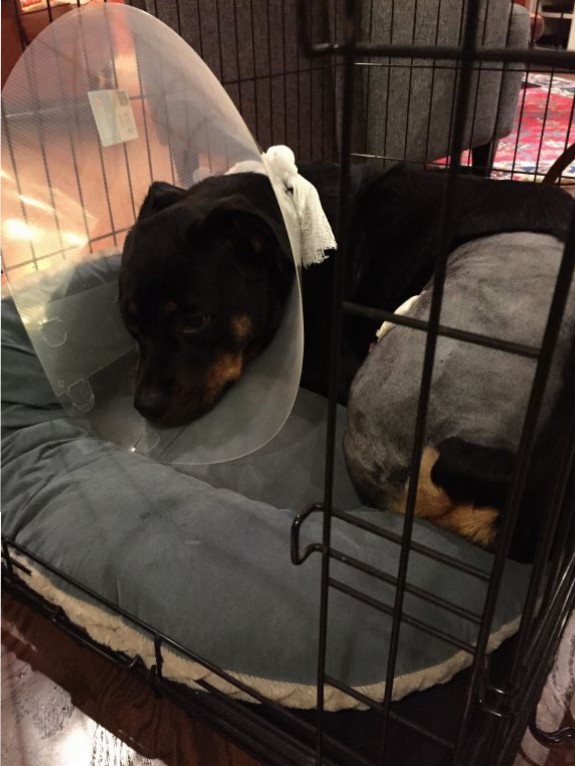 Hoping the the sleepiness lasts through the night!

Just over a year ago, Abby joined our family as a 9 week old bouncy Rottweiler puppy. It was an adjustment for everyone, but particularly the pug who was unaware that she would not stay 13 pounds her whole life. He terrorized her only to learn the meaning of payback as soon as she towered over him. 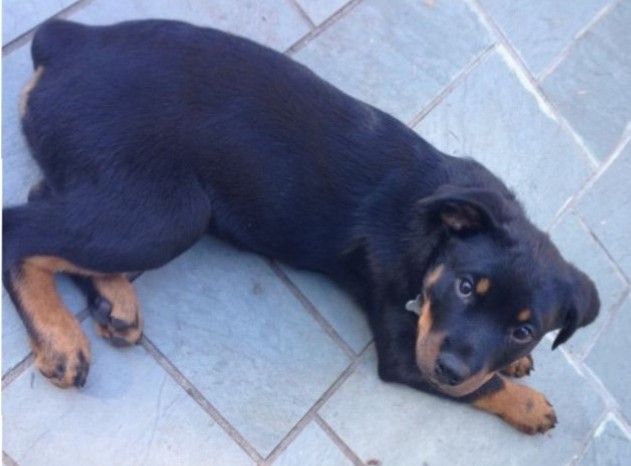 Now she is a sweet 15 month old who underwent amputation surgery today for her back left leg. We never thought we’d be here, but it all started 8 weeks ago when we took her to the vet because she would only stand on 3 legs, particularly when she ate. I originally assumed it was just a quirk, but as it progressed I figured we should make sure she didn’t have a piece of glass in her paw or something. I was horrified to hear it could be a torn ACL, but that paled to the suspected bone cancer that showed up on the X-ray a few minutes later. Her knee joint basically looked like Swiss cheese and we were warned she was at high risk for breaking her tibia. She stayed overnight and had a biopsy the next day. 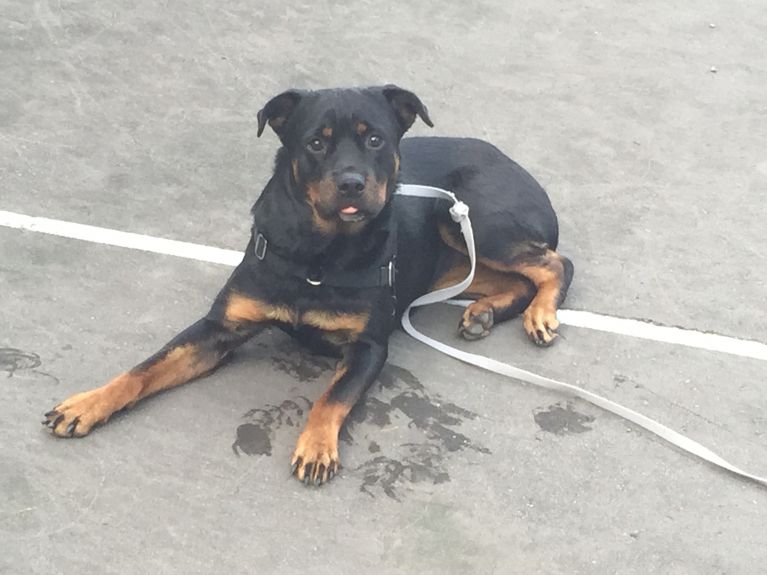 She was put on rest while we waited two weeks for the results. Have you ever told a puppy to REST? We finally found the right combination of medication that allowed her to be herself and put up with the vast change of lifestyle. The biopsy was sent to two labs and eventually came back negative for cancer. She was diagnosed with “reactive bone proliferation” as a result of an injury, although there was no injury that we ever witnessed. An open incision biopsy was suggested, but we declined because we were confident that she didn’t have cancer. She wasn’t in pain and she was still our happy girl!

2 more weeks of rest… X-rays at one month looked about the same which we took as good news because an aggressive cancer would have spread.

4 more weeks of rest…. X-rays at two months looked awful. Knee joint was even more patchy and the tibia was darkening, which to my untrained medical eye basically looked like it was dying compared to the bright white one on the right.

In the end, we declined the additional biopsy, choosing to spare her the pain for something that would offer her no relief. We now see that she is in pain, despite the fact that she masked it so well for so long. We originally just wanted to let her live out her days running on the beach and eating ice cream, but even that sounded like a fairy tale we couldn’t have. If it is osteosarcoma, it will be progressively painful and the risk of a pathological fracture is great.

We don’t have a diagnosis yet, but she did successfully come through surgery and should come home with us tomorrow. Here is our dear Abby resting comfortably at the vet. Super sweet that they sent us a picture! 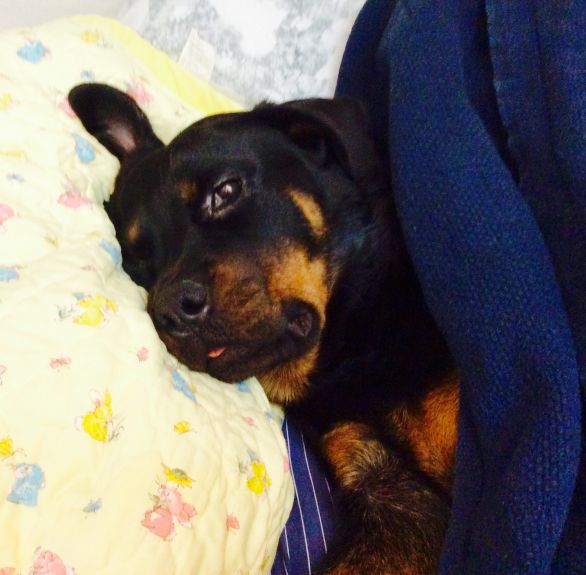 Paws crossed that, in a few weeks, she’ll get to run on the beach and be a puppy again!